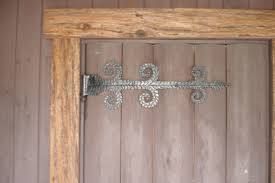 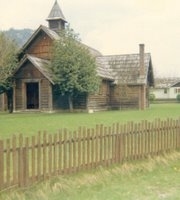 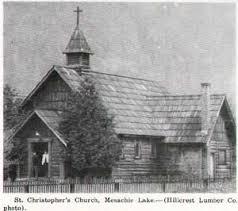 St. Christophers is probably the only church to be constructed by a logging company. It was designed by the Stone family (of Mesachie Lake). Although there was nothing unconventional in the general design, there is originality in the use of materials which were all local. The poles of the roof trusses were cut on the site, the corner posts are round Douglas fir logs with the bark left on. Yellow cedar was used for the siding. Hillcrest’s carpenters did the construction work as paid employees, but there was one company employee who took a more personal interest. As a volunteer job Dick Harsfall split the 7000 cedar shakes which roof the church.
Inside the little 24×48 foot church imagination really went to work. The fronts of the choir stalls are composed of red cedar panels framed with yellow cedar: the reading desk and font are make of maple burls and the cross on the altar is based on a maple burl. Hemlock is used largely for the interior lining.
The jug on the font was fashioned by a woman parishioner, the vases and candlesticks on the altar were turned on a home workshop lathe by an employee and the illuminated scroll, which tells the legend of St. Christopher, was the work of Robin Maunsell. The company blacksmith, Bob Biskuupovich, made the ironwork for the lamps and door hinges. Only one item was made out of the district, the glass dogwood, which is the centrepiece of the east window, was fashioned in Victoria.
The cornerstone was laid in November, 1948 by Mrs. Carlton Stone and the church was ready for use the following summer. Along with his dream of a British Columbia woods church, Carlton Stone, although an Anglican, envisaged a church which would know no denominational barriers. However, some organized religious group had to be found to take responsibility. Also, the church was sitting in the middle of Hillcrest property and it was practically impossible to give title to it. A solution was eventually found and on August 12, 1951 two Anglican bishops stood outside the closed door of St. Christopher­s and knocked three times for admittance. The door was then opened to them by the warden, who requested, in the ancient form prescribed, that their church be dedicated.
In 1952 the need for a Sunday School was met by the addition of a 20×30 foot hall, which was built in the style of the church. Due to declining attendance and increasing vandalism it was decided to move the church to Lake Cowichan. In June of 1980 the building was partially disassembled, transported, rebuilt and attached to St. Aidans Anglican Church. St. Christophers serves as the church and St. Aidans as the hall. The church was re-dedicated on October 19, 1980.

The church today offers services each Sunday at 10:30. We hope that you come and enjoy a restful and joyful Sunday service.

Thank you to Lake Cowichan District Chamber of Commerce and the Kaatza Historical Society for their research and history of our beautiful church.http://www.cowichanlake.ca/2014/05/st-christophers-church/